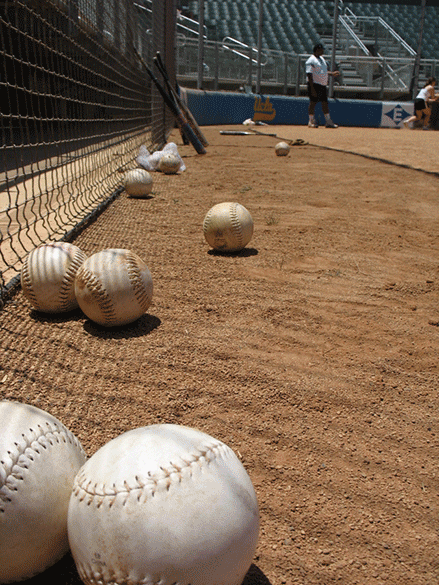 Softball is a variation of baseball that's enjoyed by people of all ages. It features most of the fundamental basics and rules of baseball, only with a larger, softer and heavier ball. It's important to note, however, that there are two different types of softball: fastpitch and slowpitch. While spectators may assume these two types are the same, there are some subtle nuances worth noting.

It should come as no surprise that the main difference between fastpitch and slowpitch softball lies in the pitching. In fastpitch, the pitcher winds his or her arm by spinning it around (similar motion as a windmill) before releasing the ball underarm. This motion allows momentum to build up; thus, increasing the speed at which the ball is thrown. Fastpitch balls are typically thrown at an upwards angle and can exceed speeds of 50-60 mph.

In slowpitch, the ball is thrown without the distinct windmill motion that's commonly associated with fastpitch. The pitcher steps forward and tosses the ball underarm. Since there's no windup in slowpitch softball, the balls are thrown at slower speeds.

Note: Most softball leagues and organizations require slowpitch softballs to be thrown in a 6-12 foot high arc. If the pitcher fails to achieve this height, the umpire may deem the pitch illegal.

Another difference between fastpitch and slowpitch softball is bunting. Fastpitch softball allows players to hold the bat across the strike zone so the ball hits it, without forcing them to swing (known at bunting). This is typically performed as a sacrifice play, meaning it advances a base runner from first to second or second to third at the cost of an out. Slowpitch, on the other hand, does not allow bunting.

Rules vary depending on the specific organization or league but generally fastpitch softball allows more freedom when stealing bases. For instance, the Amateur Softball Association (ASA) states that slowpitch players are only allowed to leave the base when the ball crosses over home plate. This is in stark contrast to fastpitch softball, which allows players to stand several feet away from the base or attempt to steal a base before the pitch is even thrown.

Because of the slower pitching speeds in slowpitch softball, innings are typically longer and result in more runs. This is beneficial for teams who rely on a strong offense but it can prove to be a handicap for those who prefer a strong defense.